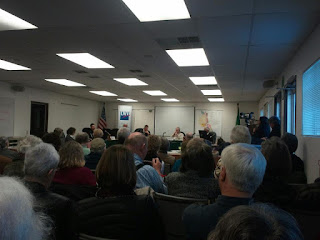 Not surprisingly, the Gateway Pacific coal terminal was the topic of some of the questions at this morning’s Small City Mayors forum in Ferndale.
The League of Women Voters of Bellingham/Whatcom County sponsored the forum.  Many thanks to the League for this contribution to civic discussion in our community.


The forum raised more questions than it answered, I think, which is one of the purposes of discussions.
Here are a couple of questions that I wish I could have asked.


Lynden Mayor Scott Korthuis stated that “the process” relating to the coal terminal is “in play right now,” so “let’s let the process take place.”  Blaine’s Mayor, Harry Robinson, said “let’s get all the information” before putting the “horse before the cart.”  Korthuis stated that he would not support the project if “the process” showed that it would be “environmentally horrible” (or "disastrous" -- I'm not sure which adjective he used.  You get the idea, in any case.)
But here’s the thing.


The small city mayors are already on record as unequivocally, unquestioningly supporting the coal terminal.  They have established that they have no interest in “the process” as you and I might envision it:  an objective approach to gathering the information needed to evaluate community, environmental, and economic impacts, thereby ensuring that coal terminal benefits are weighed knowledgeably against impacts.


Here’s a link to a video showing Mayor Korthuis of Lynden, testifying in Seattle. He stated:


“I speak on behalf of all the mayors of the six incorporated cities of northern Whatcom County—that would be Blaine, Everson, Ferndale, Nooksack, Sumas, and Lynden.”

“Let me emphasize that all the mayors of these cities have endorsed the Gateway project.”


“We are confident that Gateway can be built to protect the environment.”


“Permitting agencies should not interfere with the lawful conduct of commerce.”


These statements demonstrate not one shred, not one iota, of intent to pay any attention to the “process.”  The small city mayors have already made their decision.  Process is for everyone else, apparently.


In fact, as David Stalheim pointed out during today’s forum, some of the small city mayors subverted “the process” by walking to the head of the line at the Ferndale scoping meeting.  Line-sitters paid by the project applicant held spots for VIPs, while citizens who had followed the “process” by showing up early and waiting in line for hours wound up with no opportunity to speak.
So, my first question would have been:  “What gives you the right to tell everybody else to follow the ‘process’ when you have already made it clear that you, yourselves, are above the process?”


One of the more heartfelt and moving moments of the meeting came from Blaine’s mayor.  In response to a question about each mayor’s major concerns, Mayor Robinson said that his major concern was delays caused by trains.  “Trains slowing down affects our city very dramatically,” he observed. For example, school buses arrive at school late when they have to wait at rail crossings, and children who depend on school breakfasts have to go without breakfast when the buses are late.


Trains also delay Blaine’s emergency vehicles.  Mayor Robinson vividly described his own wife’s experience.  She had required an ambulance, and the local ambulance was not able to provide the drugs that she needed.  An ambulance was called from Bellingham – and it had to wait 20 minutes for a train to pass.


“If she had required those drugs [to live],” he concluded, “she would have died.”


You could be excused for expecting that the mayors would show some human reaction to this story.   You might think, for example, that at least a few of the mayors would show concern for the fact that the Gateway Pacific project would add 18 ADDITIONAL coal trains per day, each 1.6 miles long.  You might assume that this concern would lead to a broader discussion, in light of the fact that their constituents, maybe even their own family members, might. . .die from the impacts.


You would be wrong on all counts.


In response to a question asking whether BNSF, the railroad company, should pay for the improvements needed to avoid impacts from the 18 additional 1.6-mile-long trains, someone – Mel Hansen from Ferndale, I believe, but I was in the back of the room and couldn’t see well – growled “No.  You don’t saddle a business that that much undue burden.”


Nobody contradicted him.  So I waved my hand with a question that I didn’t get to ask at the time:
If BNSF shouldn’t be saddled with so much undue burden, who will pay for those improvements?  Anyone?  Will you, the small city mayors, pay for the needed improvements?  Or is it OK with you simply to impose this burden on your constituents, who will have to live (or die) with the delays?
That’s the question that I wanted to ask, this morning.  But then I listened to that YouTube video of Lynden’s Mayor testifying in Seattle.  He said this:
“It would be inequitable for a major population center like Seattle or Tacoma to recognize transportation infrastructure capacity for their own needs while seeking to deny it to other communities.”


Small city mayors, is it “equitable” to impose the harms that 18 more trains will create– the kids who don’t get breakfasts, the spouses and children and parents and siblings who don’t get emergency services in time – on communities between here and Wyoming, just for your “own needs”?

Jean Melious is the Secretary of the Board of Directors for RE Sources for Sustainable Communities.

More of her writing can be found on her co-authored blog, Get Whatcom Planning.

Posted by Hannah Coughlin at 12:07 PM