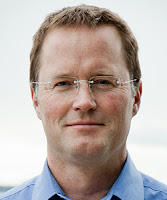 RE Sources’ staff, board and supporters bid a bittersweet adieu to Matt Krogh, our North Sound Baykeeper for the past three years. Bitter because we love him; sweet because we know sprouting leaders and off-shooting them to positions of greater influence is one of the most important ways we create the future we want to see.

In one of his last staff meetings, Matt likened RE Sources' green house nature to the reproductive patterns of the Chlorophytum comosum, commonly known as the Spider Plant.  Ensuring the continuation of her genetics, the "Mala Madre" grows planttlets within her leaves, then expels them to root themselves and become independent bodies.

So many past employees of RE Sources have sprung from RE Sources' heart to root themselves into important roles of authority: Carl Weimer, Dave Bennick, Jack Weiss, Carol Rondello, Lisa Friend, Kyle Morris, Dean Fearing, and so many more. The list of leaders we’ve helped cultivate, watched blossom within our walls, then said goodbye to as they branch out into the larger community gives us confidence in leadership we can work along side to create a thriving, sustainable future.

Such is the case with Matt, who is moving into a new position at ForestEthics as director of their nascent Tar Sands Free West Coast campaign. His position will involve work up and down the entire west coast to create an unbroken barrier against the flow of fossil fuels from North America into the world's markets.

We couldn’t be more proud – or more excited to see Matt’s intelligence, leadership, and tenacity applied to such an important issue. With the two giant coal terminal proposals we've been fighting soon to go into draft EIS phase for a few years, the imminent and extreme threat represented by tar sands (and other crude) by rail and vessel needs to be addressed – and now.

We need strong leaders in positions of influence now more than ever. While it’s hard to see him go, we are so excited for the work that Matt will be doing to oppose irresponsible national fuel trafficking. And we are looking forward to many future partnerships with ForestEthics.

“I've loved campaigning for clean water and against coal as RE Sources' North Sound Baykeeper,” Matt says. “Highlights abound: working with Washington Waterkeepers to file suit against EPA to get Washington an accurate fish consumption rate, creek patrols looking for non-point-source pollution, getting kids to the beach for naturalist programs, and meeting so many incredible people dedicated to clean water--truly remarkable experiences all.”