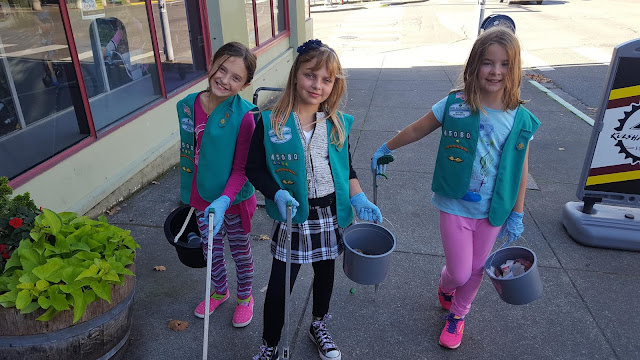 As the final racers crossed the finish line, I met with local Jr. Girl Scout troop members to survey the area around the Depot Market Square. Our challenge was to clean up the litter left behind by the earlier crowd. The Jr. Girl Scouts were one of the first groups to participate in RE Sources Sustainable Schools new Waste Rangers program, a service-learning program focused on working with youth organizations to raise awareness about solid waste issues in Whatcom County and engage youth in projects to address these issues. Through the litter clean-up following the marathon, the girl scouts learned about some of the issues litter causes in our community, like marine debris caused from litter washing into storm drains on rainy days, or wildlife accidentally eating the litter and getting sick. 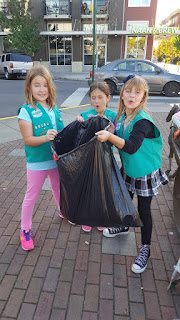 The girls also learned that a large majority of litter is created inadvertently by people — whether it's forgetting and walking away from your coffee cup, or accidentally dropping something from your pocket while you're getting your phone out, or the wind blowing waste from recycle bins — everyone accidentally creates litter at some point. Our new waste rangers are learning that solid waste issues such as litter is everyone's responsibility to address, and working collectively we can make an impact.

The 3 girl scouts, their parent chaperones and one 4 year old "girl scout in training" were able to collect 10 pounds of litter from the area around the finish line, even after volunteer crews did the majority of the post-race clean up. When asked what they learned and what they liked, the newly anointed Waste Rangers said they learned that a lot of garbage ends up as litter and they liked that they were able to make a difference and help their community. Even the scout in training said that her favorite thing was helping the big girls find the litter- another of Waste Rangers in the making!
Posted by Hannah Coughlin at 4:25 PM